Technology is developing at such a fast pace that we now have inventions available to us that we would never have thought possible ten years ago!

Among these amazing tech inventions, robots are taking the world by storm, offering assistance with every aspect of life, from cooking a meal to delivering a package.

Although in film and literature robots are often portrayed as evil, in this article we’re going to take a look at 11 ways that robots can help us and in particular, how robots can help elderly people.

How Robots Can Help The Elderly

The three main reasons robots have been developed for elderly people are:

Robots can also be programmed to learn an elderly person’s preferences and habits and detect changes in behaviour, including alerting caregivers or emergency services in the event of a fall.

From small tasks to more significant help, the overall aim is to improve elderly people’s quality of life, making them feel more independent, happier and more confident living alone or with reduced support.

Unfortunately a side effect of getting old is often loneliness, as people lose partners and friends and are no longer as physically able to go outside.

In fact, according to Age UK, more than a million elderly people in the UK say that they go for over a month without speaking to anyone.

Enter Pepper, the world’s first social humanoid robot. Pepper was created specifically for human interaction and can recognise faces, basic human emotions and hold a conversation. Pepper has been successfully trialled in care homes in both the UK and Japan, with residents’ mental health found to improve after spending time with the robot across two weeks.

Pepper and other robots like Cruzr have also been equipped with sensors to monitor blood pressure, oxygen saturation and body temperature, allowing caregivers to provide the proper care and treatments on a flexible basis.

In the wake of the pandemic, visitation restrictions and social distancing guidelines meant that many elderly people felt isolated and alone, unable to see family and friends.

In order to help them cope, robotics companies created a robotic ‘pet’ to give to residents in nursing homes, hospitals and assisted living facilities. These robotic pets register touch, light and sound, can respond to being stroked, recognise words, bark or purr and even have a heartbeat.

When we get older, tasks we used to find easy often become more difficult, including washing, dressing and eating.

There are now several types of robot available to help elderly people eat and drink, such as the My Spoon robot from Robotarm. My Spoon helps those with limitations in arm and hand function by bringing food from a plate or a bowl to their mouth. 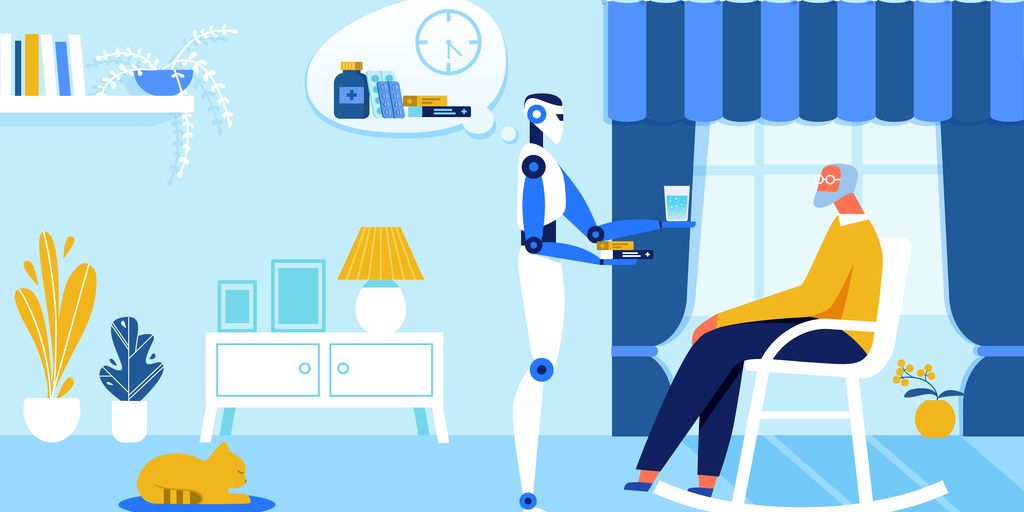 This reduces stress around mealtimes, letting the person eat at their own pace, rather than relying on someone else to feed them.

Baths are great - not only do they keep us clean, but they’re also good for relaxing, promoting blood circulation and wellbeing. However, when you get to a certain age, having a bath may no longer be an option if you don’t have someone to help you.

At the World Expo in 1970, Sanyo unveiled their ‘Ultrasonic Bath’, otherwise known as ‘The Human Washing Machine’, which used a combination of water jets, wave generators and driers to wash and dry people.

Robotics companies are still working on bath robots that can lift elderly people safely in and out of a bathtub and provide assistance with washing.

Elderly people tend to be less able to get up and move around than younger people, so several robots have been developed to help with this aspect of life. The Robear robot was an experimental nursing care robot developed by the RIKEN-SRK Collaboration Center for Human-Interactive Robot Research and Sumitomo Riko Company in Japan.

Robear aimed to lift people out of bed, help them into wheelchairs and even offer assistance with standing. Other models like the RIBA (Robot for Interactive Body Assistance) are capable of moving residents in and out of bed and wheelchair.

Next on our list is ElliQ, an interactive robot that helps older adults to feel more independent. ElliQ provides companionship, entertainment and fun, as well as helping people reach their health and wellness goals.

As users spend more time with ElliQ, the robot adapts its approach to tailor suggestions to their unique needs and preferences, personalising the experience to make it more genuine.

Inventions like the Roomba, the robotic vacuum cleaner, can really help elderly people with daily housework. Instead of the person having to lift a heavy hoover around and potentially hurt their back bending over, the Roomba automatically travels through the home to hoover up dust and dirt in no time at all.

Special cameras and sensors enable the Roomba to avoid obstacles and return to a ‘base’ after cleaning to stop them from getting underfoot. Some models even self empty into a self-sealing bag.

The use of medical robots in elderly care is a growing industry.

One example of this is Moxi, a one-armed robot that can travel around a hospital, picking up and delivering medicines, equipment, patient samples or bedding.

Moxi was invented by Andrea Thomaz and Vivian Chu in Austin, Texas and during studies, was found to save clinicians several hours a day by creating its own internal map and following delivery orders through an app.

HERB stands for Home Exploring Robot Butler and is an autonomous robot that can learn to perform tasks such as putting books on a bookshelf, loading a dishwasher, clearing a table and fetching drinks from the fridge - pretty impressive!

Designed in Japan as part of the Carebots initiative, HERB effectively maps out its environment in order to navigate safely around without crashing into things or knocking them over.

It truly is encouraging to see the potential that robots like this have to help our elderly population. However, although robots are certainly useful, nothing can replace the warmth and comfort of human interaction.

So, if you have a parent or loved one who lives alone, make sure to visit them regularly - and if you don’t have an elderly relative but want to help, why not volunteer to become an Active Buddy or a Befriender to see how you can help elderly people in your area.