100 years young: In which areas will you find the most UK centenarians?

Getting old is something that will affect most of us. However, it is likely that only a few of us will live to see our 100th birthday (and get that all-important card from the Queen). But are you more likely to become a UK centenarian (100 years old) in some parts of the country compared to others? Are areas with the most older people also the best places for elderly people to live?

With this in mind, data was gathered for the oldest recorded people in the UK and where they live(d). From this, the total number, and average age, of UK centenarians per region was calculated.


Data was also collected on:

This shows how trends have changed over time and allows for global comparisons.

As of 2020, there were estimated to be 15,834 people aged 100 or above in the UK, representing 0.02% of the population. In the past two decades, there has been a 58% increase in the number of UK centenarians. However, according to ONS research, life expectancy in the UK for men has fallen for the first time in four decades, to 79 years, whereas female life expectancy has remained largely unchanged, at 83.


Supercentenarians in the UK 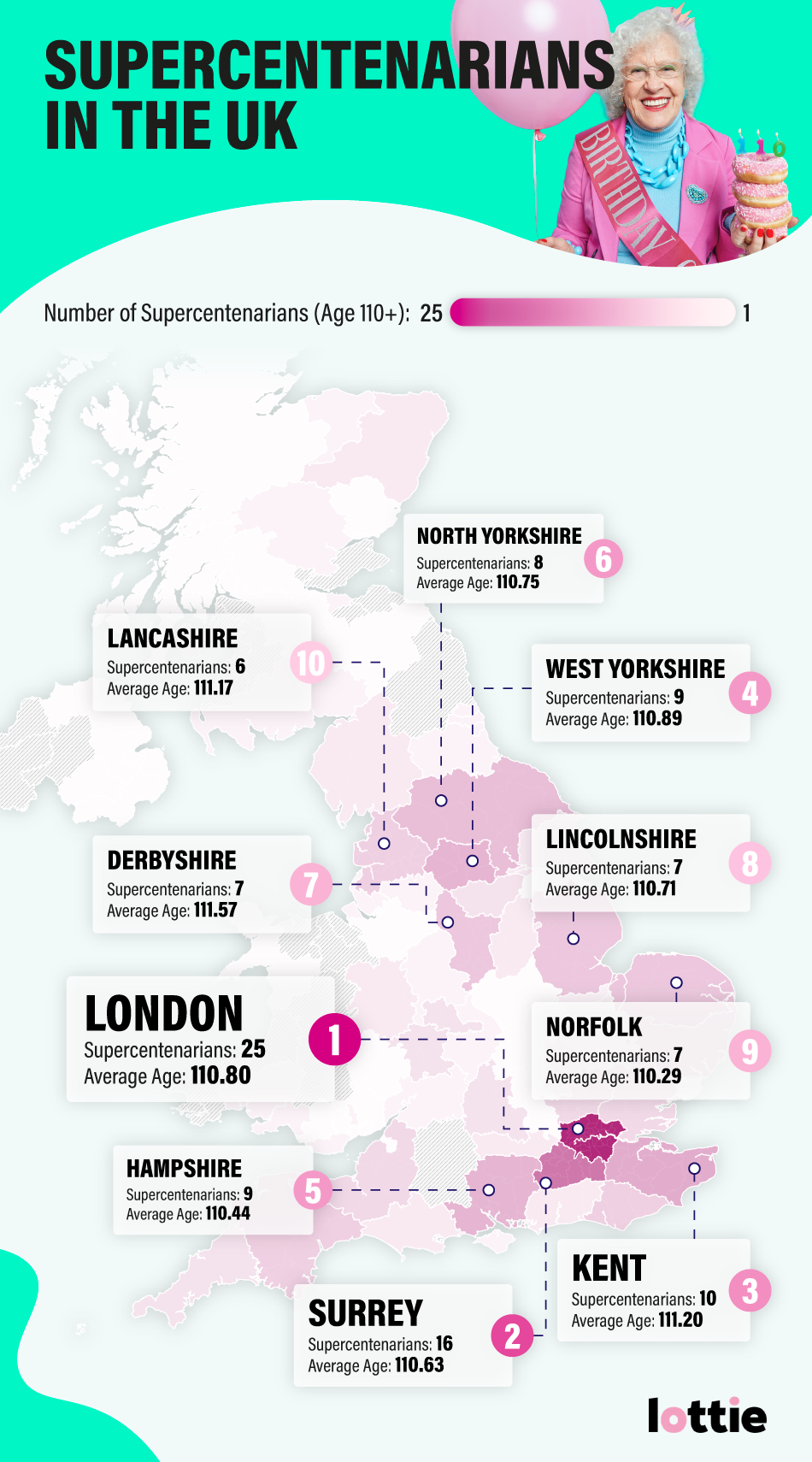 Across the UK, there are 237 people aged 110 or above (supercentenarian). Noticeably, the lion’s share are found in England (206), followed by Scotland (18), Wales (11) and Northern Ireland (2). The vast majority of supercentenarians in the UK can be found in the southeast.

In fact, you have to go all the way down to Aberdeenshire, ranked 30th for the number of supercentenarians, to find the UK’s first non-English representative, and Scotland’s highest entry, in joint 27th position. However, Highland and Stirlingshire each have a resident who has lived to the ripe old age of 113 - making them joint first in the UK, with West Glamorgan, in terms of average age.

Down in 31st place, West Glamorgan happens to be Wales’ highest placed county for UK supercentenarians. Despite only ever having two supercentenarians in their population, this region of south Wales actually holds the title of the UK’s oldest county (with an average age of 113 for these two residents). No surprise, however, that Swansea happens also to be one of the best cities for elderly care in the UK.

By comparison, Staffordshire is England’s oldest county (in fourth place), with an average age of 112 for their two golden oldies. North East Lincolnshire follows closely behind in fifth with the same average age, but only one supercentenarian to its name.

Towards the bottom of the list, we have two counties from Northern Ireland. County Antrim (home to the country’s capital, Belfast) and County Down each have one person aged exactly 110.


Supercentenarian gender split in the UK

In line with global trends of gender life expectancy, UK females are storming ahead of their male counterparts.

Of the 238 people in the UK aged 110 or above, an impressive 223 are female, representing 93.7% of the UK centenarian population. By contrast, 15 UK males have lived to a similar age, constituting a meagre 6.3%.


Longest married couples in the UK

The award for the UK’s longest married couple goes to W.& E. Jones. Having both been born at the turn of the twentieth century, they were married for a remarkable** 83 years and 359 days** - 80% of their lives.

Narrowly behind them are M.& H. Kaye, by a mere 29 days. Having both lived to the grand age of 106, they were married for almost 79% of their life and lived out their remaining days together on the south coast of England.

The next three longest married couples all share the same length of marriage (82 years), yet are separated by seven days between them.

E.A. Day (the second oldest male in our longest-married list) was married to E.M. Day for exactly 82 years and seven days until his death in 2019, when he was 107 years old. Having married just before the Second World War, this represented almost 77% of his life and over 81% of her life.

In fourth position overall, S.A. Burgess holds the crown for the longest marriage as a percentage of their life. Having been married to J.A. Burgess for 82 years and two days, she just made it to her 100th birthday in 1965, meaning she was married for 82% of her life. They are also, incidentally, the only recipients in the top 20 who were married prior to 1900.

In terms of life expectancy, over half of the couples buck the trend for women outliving men. In 13 of the 20 couples, the males lived longer, with three of the couples living to the same age.


Changes over time (% likelihood of reaching 100+)

The chance of living to 100 slowly increases over the decades for the entire population.

As we enter the twenty-first century, the chance of people living to 100 increases significantly.

By 2010, the population of UK nonagenarians (90+) diminished to just over 100,000. Despite this, the chance of these people making it to 100 increased to a whopping 15%. Females continue to dominate this age bracket, making up over two-thirds of the population for 90-year-olds. Remarkably, 17.5% of these women would make it to 100, compared to 9.5% of men.


How does the number of centenarians in the UK compare to other countries?

The definition of old age will vary depending on where you live in the world.

Worldwide, people are generally living longer, largely thanks to improvements in quality of life, sanitation, nutrition, and access to healthcare facilities. Generally speaking, countries with the best elderly care tend to have higher life expectancies, which is certainly true here.

With just under 68 million inhabitants, the UK is the world’s 21st largest country. However, it ranks an impressive 10th in the world for the number of centenarians, and is the fourth highest European country behind France, Germany and Italy.

But in some respects, this is futile; countries with a higher population should statistically have more elderly people - so what about when we look at the data as a percentage of the total population?

Aruba, in the Caribbean, has four centenarians per 100,000 compared to Kiribati in the Pacific, which has two per 100,000. The remaining seven nations are all African nations, ranging from those who have one centenarian in their entire population (Sao Tome and Principe, Western Sahara, Comoros, and Burkina Faso) to Eswatini, which has three.