Data Insight > The UK Cities With The Best Elderly Care

The UK Cities With The Best Elderly Care

With an increasingly ageing population, the need for high-quality elderly care in the UK is greater than ever before. A study from the Office of National Statistics predicts that the number of people aged 85 or over is likely to treble by 2066, suggesting that this issue will become even more prevalent as the years go by.

While the need for high-calibre care homes cannot be overstated, good elderly care is about more than just nursing and accommodation, with everything from outdoor commutes to social interactions playing an integral role in someone’s quality of life.

With this in mind, Lottie conducted a study to find out the best and worst places for elderly care in the UK. Looking at key metrics like care home quality alongside other significant factors such as local restaurant quality, local park access, and proximity to the closest hospital, we gave each major city in the UK an average score out of ten to determine the best places for elderly care in the UK.

The Major UK Cities With the Best Elderly Care 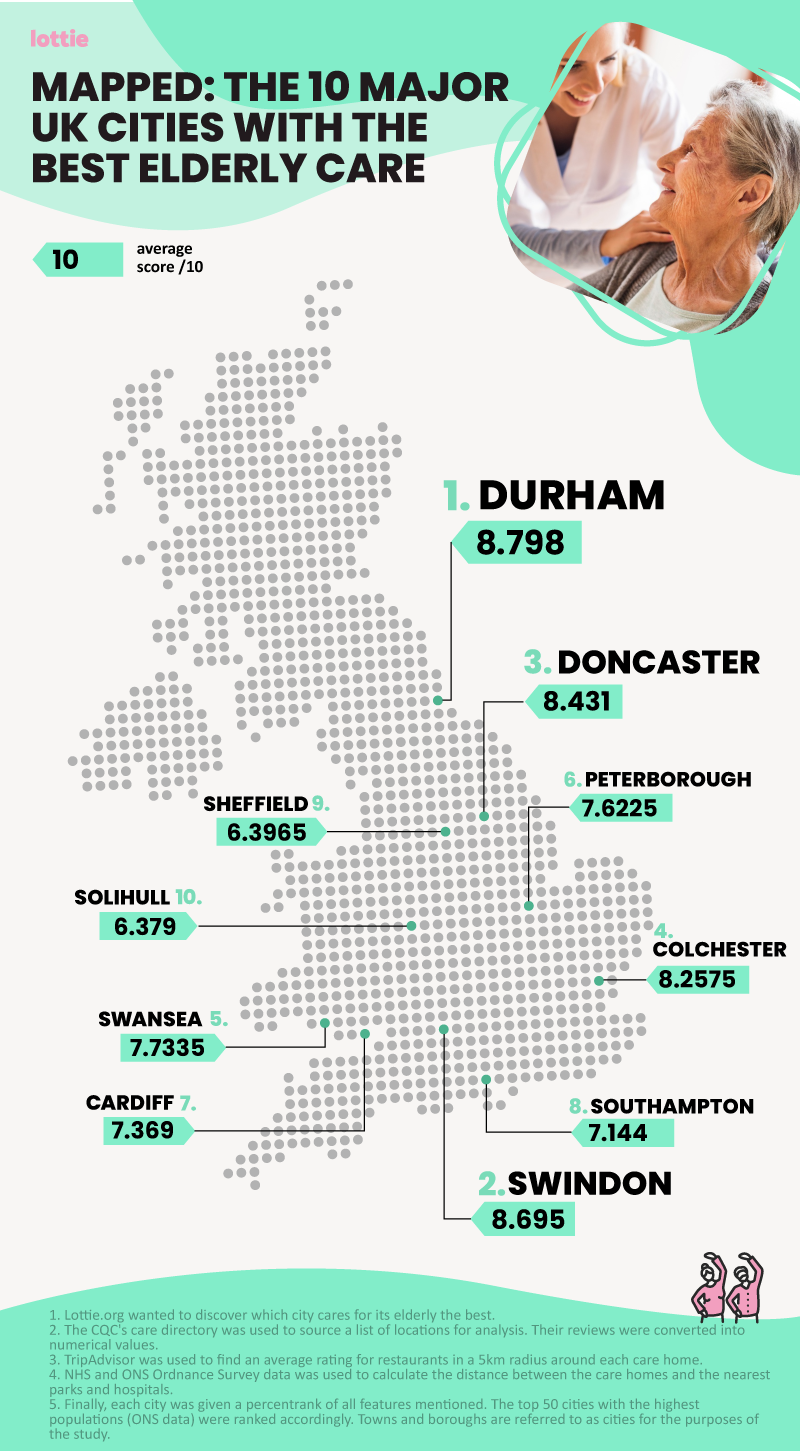 Durham was found to be the major city that offered the best elderly care, with an overall score of 8.8 out of 10. This score was primarily achieved by an excellent care home review score of 9.39 and similarly high scores for hospital proximity and restaurant quality.

Swindon was the highest placed southern city on our list, ranking second thanks to its stellar scores for care home reviews, park access, and hospital proximity. Despite the high overall rating of 8.7, the Wiltshire town’s poor restaurant-quality score of 3.88 prevented it from topping our list.

In third place was Doncaster, which had its overall score significantly bolstered by 9.8 ratings for park access and hospital proximity. While the city in South Yorkshire obtained solid scores in most categories, its care home review score of 6.94 prevented it from ranking even higher on our list.

An average care home rating of 6.33 did not prevent Colchester from ranking in fourth place. With excellent scores for hospital proximity and park access, the Essex town achieved an overall score of 8.26.

With a perfect score of 10 across its 22 care homes, fifth-placed Swansea was found to have the best care homes of all the major cities. Unfortunately, a lowly park access score of 2.65 prevented the South Wales city from achieving an even higher overall score than 7.73.

Peterborough finished in sixth place thanks to its excellent hospital proximity and park access scores. Despite an overall rating of 7.62, the Cambridgeshire city’s care home review score of 5.92 prevented it from obtaining an even higher position.

Seventh-placed Cardiff was the second Welsh entry on our list, with an exceptional care home score of 9.8 contributing to an overall rating of 7.37.

Although Southampton received an underwhelming hospital proximity score of 3.88, this did not prevent the Hampshire based city from finishing eighth with a final score of 7.14.

Sheffield was the penultimate entry in our list, with a score of 6.4 enough to ensure a ninth-place finish.

Our top 10 was completed by Solihull, with the West Midlands town’s stellar park access score contributing to an overall score of 6.38.

The Major UK Cities With the Worst Elderly Care 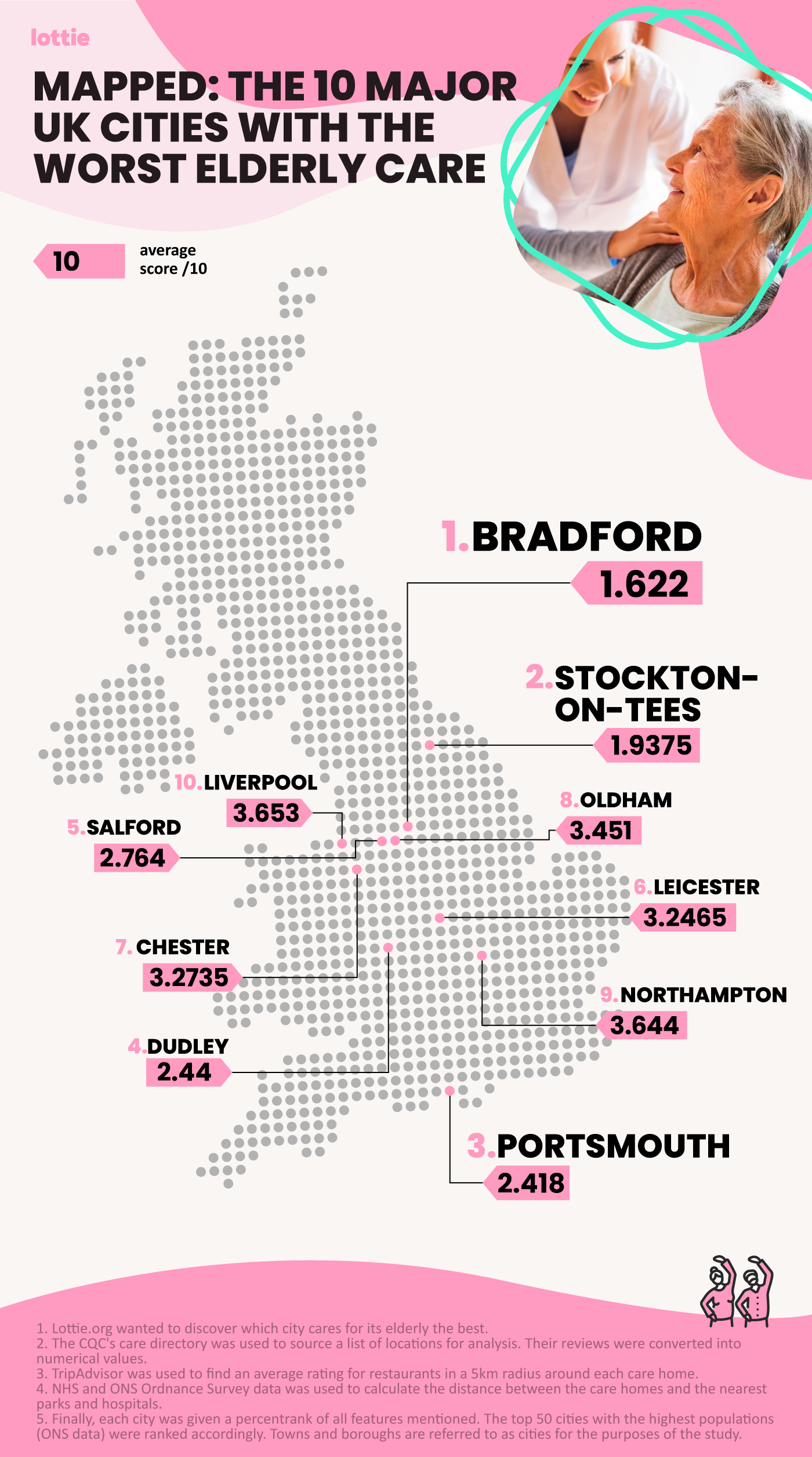 With a worrying overall score of 1.62 out of 10, Bradford was found to be the place with the worst elderly care amongst the UK’s major cities. This West Yorkshire city’s ranking is largely attributable to its shocking care home review rating of 0.2 and poor hospital proximity score of 0.82.

The North-Eastern town of Stockton-on-Tees was second on our list, thanks to its alarming score of 1.22 for average care home ratings. As with Bradford, Stockton achieved poor ratings in most categories but was saved from bottom place thanks to a slightly improved hospital proximity score of 4.29.

Unlike its Hampshire neighbour Southampton, Portsmouth was found to be among the poorest places for elderly care. With concerning scores in the categories of care home rating and hospital proximity, the south coast city received a lowly rating of 2.42, which ranked it as the third-lowest place on our list.

The fourth worst major city for elderly care was Dudley, with its frightening care home review score of 0 resulting in a 2.44 rating.

Salford was found to be the fifth-worst place for elderly care, with poor park access and hospital proximity ratings resulting in an overall score of 2.76.

Leicester took the sixth spot on our list, with a dismal care home rating of 1.02, dragging its total score down to 3.25. The Leicestershire city was saved from an even lower ranking thanks to a reasonable park access score of 5.31.

Seventh-placed Chester is the second North West city in our bottom 10 thanks to its mediocre score of 3.27. Despite receiving poor scores in three of our four categories, Chester performed strongly in the restaurant category, achieving a perfect score of 10.

Oldham joined Salford as the second place from the Greater Manchester area to feature in the lower part of our list. With an overall score of 3.45, the metropolitan borough was found to have the eighth-worst elderly care thanks to its poor scores for park access and hospital proximity.

In ninth place was Northampton, whose overall score was damaged by a care home rating of 0.82.

Rounding off our list is Liverpool, with the Merseyside city’s care home and park access scores resulting in a final score of 3.65.

With our population living longer than ever, elderly care has never been more important. Thankfully, there is more expert advice and guidance are available than ever before when arranging care for yourself or a loved one. As well as considering which locations have the best care it's also important to think about if they are good places to live for elderly people.

Tips for Caring for a Loved One

Chris Donnelly, Co-Founder, and CEO at Lottie has recommended the following tips for those caring for a loved one:

Maintaining regular visits, making sure your loved one knows when to expect you and what your plans are in advance. This may help to settle anxiety and ensure they're ready for the day! Also, exploring digital communication, and helping your loved one to understand how to use it.

Is there anything your loved one enjoys doing? There may be local clubs or community groups that can support them to continue to do these activities, or even take up new ones!

It's important to get your loved ones to meet new people, and a wonderful way to do that is through inter-generational mixing. Are there any local pen-pal initiatives, or opportunities to interact with some younger people? This can lower stress levels and lift moods.

This doesn't change as you age! It's more important than ever to get that balanced diet. This can also boost your immune system.

Sleep lowers stress levels and gives your body some time to relax and heal. Aim for at least 7-9 hours a night, so that your immune system can replenish!

Lottie is a digital marketplace that connects care seekers to the UK’s best care homes at an affordable price. To find out more about how Lottie could help with finding accommodation for your loved one, visit the about section of our site today.

**1. **Lottie.org performed research to discover which are the best care homes in the UK and which city treats its elderly overall the best.

CQC’s care home directory data was used to create a seed list of locations to use for analysis.

2. Reviews for care homes were converted to numerical values:

Welsh care homes lacked this data, so a score based on the number of improvements required as inferred from CQC inspection reports was generated.

3. By using the postcodes of each care home, its latitude and longitude were calculated. Using this, TripAdvisor was used to find all the restaurants in a 5,000m radius around each care home, to give an average rating for these venues. Restaurants without reviews were ignored.

4. NHS data featuring a list of all hospitals and their latitude and longitude were used to find the distance between each care home and the closest hospital to them.

5. Finally, the distance between each care home and the closest park entrance was calculated by using ONS Ordnance Survey data.

6. Next, the data was aggregated on a city basis. Only cities with at least ten care homes were considered. From this list, the top 50 cities with the highest population were taken (note London boroughs were all collected under the name London). Population figures are based on ONS data. Each city was given a percent rank for each of the following features:

These scores were assigned a weight and were averaged to create a final overall score for each city.

The weights are as follows:

Note: All distances are presented in metres.

Based on your selected criteria and the activity of similar individual’s using Lottie.
The Ultimate Spotify Playlist For People Living With Dementia
Music has long been thought to provide profound benefits to those with dementia. Lottie reveals its ultimate Spotify playlist for people living with dementia.
by Will Donnelly
Over 60 and single? This city is your best shot at finding love!
What are the best UK cities for over-60s to fall in love? Lottie reveals where's your best shot at finding the one.
by Will Donnelly
100 years young: In which areas will you find the most UK centenarians?
Discover in which areas of the country you will find UK centenarians and how the data compares for UK men and women.
by Will Donnelly