The Ultimate Spotify Playlist For People Living With Dementia

The power of music has been mythologised for generations for its ability to lift moods, heal wounds, and unite people. Whether it’s the personal impact of listening to your favourite song, or the mass communion of global events like Glastonbury or Live Aid, music sparks unique memories for us all. While anyone can benefit from the mood-enhancing qualities of their favourite music, these benefits become even more important to those living with dementia. For people living with dementia, music can provide a vital catalyst to trigger memories and positive feelings that can help them reconnect with loved ones.

As the years have passed, the health benefits of music have become increasingly backed by data, with a white paper from Music for Dementia citing a string of studies in which music has been found to help those living with the condition.

To create each playlist, we ranked each song based on factors such as danceability, energy, positivity, lyrics, tempo, and loudness to create two playlists—one based on its upbeat nature and the other for its calming qualities.

The upbeat playlist focuses on songs that can encourage dancing, light exercise, and energy expansion that can improve mood and cognition in those living with dementia. As such, the songs included in this playlist tend to have higher scores for danceability and energy.

Conversely, as the calming playlist focuses on songs aimed at relaxation and stress reduction, this playlist is filled with calming songs which score lower on these metrics.


The Ultimate Upbeat Spotify Playlist For People Living With Dementia 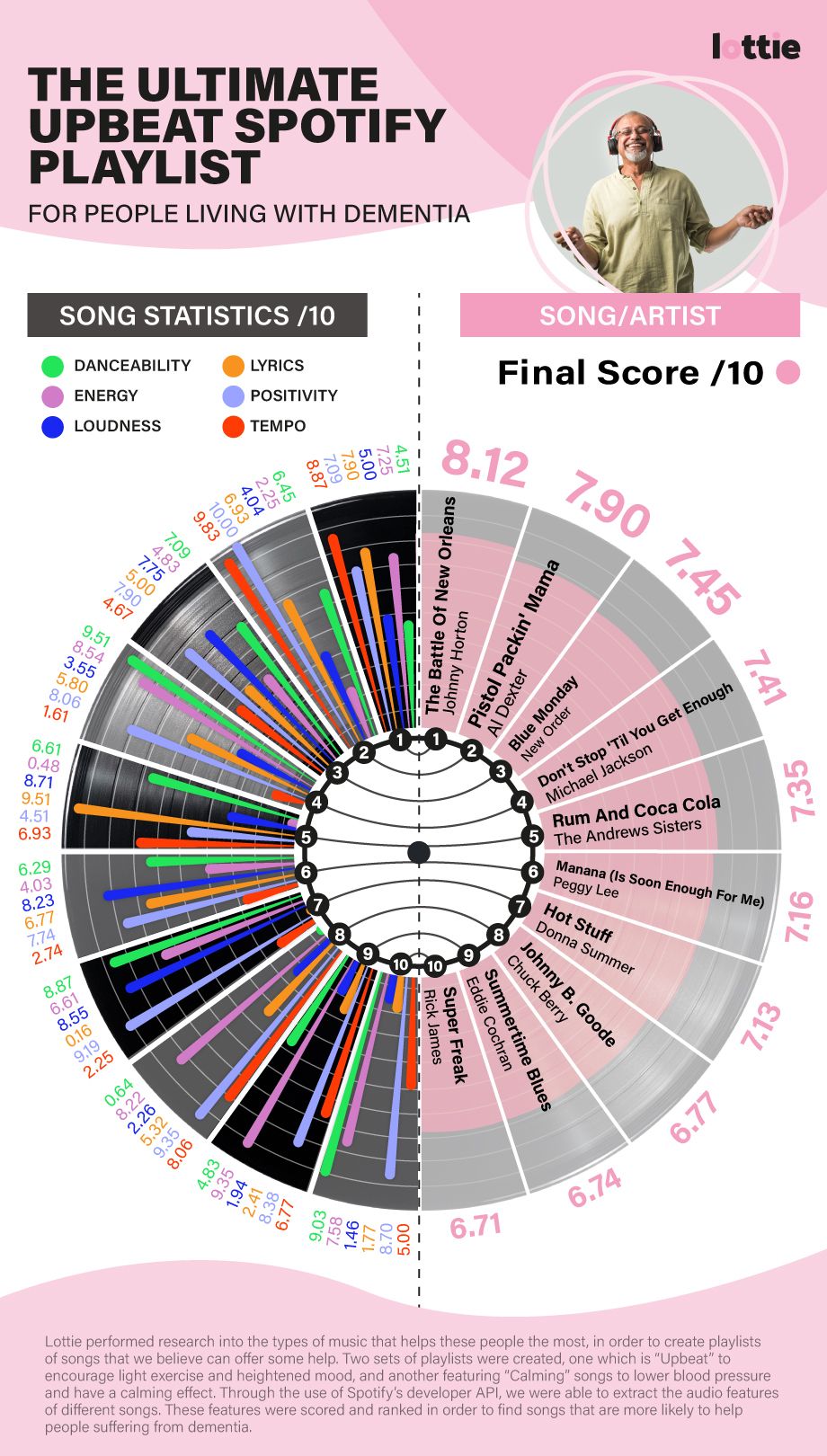 The white-hot thrill of listening to your favourite upbeat music can be enjoyed by anyone. Listening to happy, energetic songs can evoke feelings of intense joy, causing our brain to release pleasure chemicals such as serotonin and dopamine.

These mood-enhancing chemicals can have profound cognitive benefits for those living with dementia, with research from Dementia UK revealing improved attention, concentration, and memory as three potential benefits.

Our upbeat playlist for people living with dementia is jam-packed with iconic songs from the ‘30s to the ‘80s, to ensure listeners from all-age groups can enjoy the music and nostalgia from their youth.

Of all the songs in our study, the country acoustics of Johnny Horton’s 1959 single The Battle Of New Orleans achieved the highest score on our playlist. With exceptional scores for tempo, energy, and lyrics, the Grammy award-winning song obtained an impressive average rating of 8.12.

Followed by Al Dexter, a fellow country singer who achieved a final score of 7.9 with his 1943 single Pistol Packin’ Mama. The Texan musician obtained a high-placement mainly to his song's excellent scores for tempo and positivity.

Rounding off our top three is New Order, who recorded a phenomenal average score of 7.45 for their pioneering indie dance anthem Blue Monday. Released in 1983, the song—which became the best-selling 12-inch single of all time—received excellent scores for danceability, positivity and loudness.

In fourth place, Michael Jackson’s 1979 hit Don't Stop 'Til You Get Enough was found to be the highest-scoring song of the seventies. With an outstanding danceability score of 9.51, the King of Pop’s breakout solo release scored an impressive final rating of 7.41.

The former Jackson 5 frontman was joined on the playlist by The Andrews Sisters, with the harmonised jazz of their wartime single Rum and Coca-Cola achieving a final rating of 7.35. With solid scores for danceability and lyrics, the 1945 hit is one of six songs from this decade featured on our playlist.

Elsewhere on the list, there are an array of songs that have remained iconic to listeners across the generations, from the primitive hip-hop of The Sugar Hill Gang’s Rapper’s Delight (1979) to the era-defining disco of Chic’s iconic Le Freak (1978).

The Ultimate Calming Spotify Playlist For People Living With Dementia 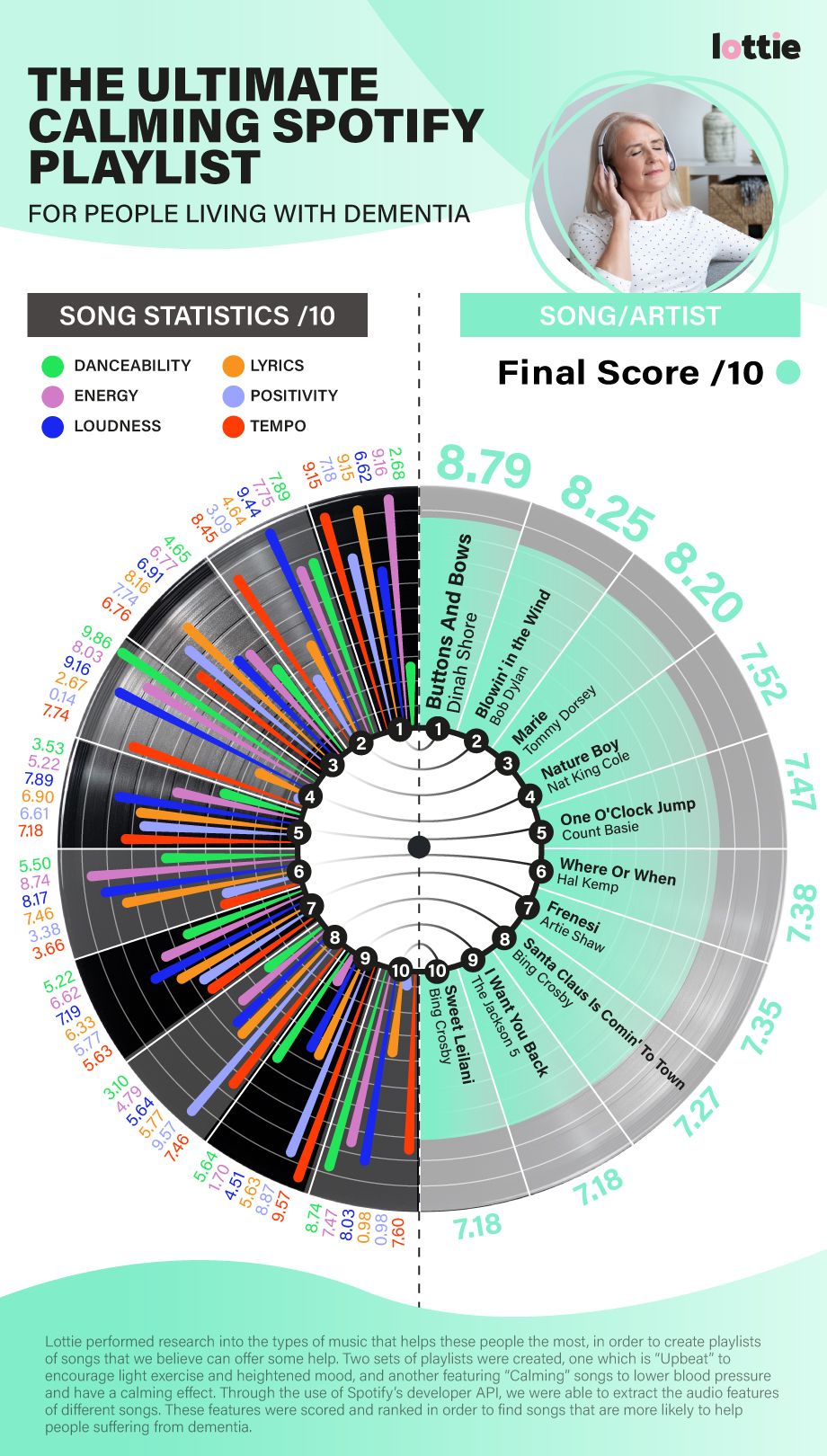 Any music fan can relate to the serene escapism of listening to their favourite calming songs. While the euphoric buzz of an uplifting playlist is perfect for some occasions, the tranquillity of basking in the lighter tones of relaxing music can provide the perfect antidote to hectic, stressful times.

The highest score on our calming playlist belonged to Dinah Shore for her 1948 hit Buttons and Bows. The song — which received an academy award for Best Original Song when it was featured in comedy western The Paleface — achieved a final rating of 8.79 thanks to its stellar scores for tempo, lyrics, and positivity.

Second on our list was Bob Dylan with his iconic philosophical ballad Blowin’ in the Wind. Released in 1963, the song which was ranked 14th by Rolling Stone in their 500 greatest songs of all time, received an overall score of 8.25.

Ranking one place behind Dylan was Tommy Dorsey, with the ‘big band’ pioneer’s 1939 single Marie finishing third. The trombonist dubbed ‘the sentimental gentleman of swing’ recorded excellent scores for positivity and lyrics, leading to an average score of 8.2.

Iconic jazz singer Nat King Cole obtained the fourth highest score on the playlist, with his 1948 hit Nature Boy receiving an overall rating of 7.52. The artist affectionately known as ‘King’ was joined in our top five by swing legend Count Bassie, who achieved a 7.47 rating for his 1937 single One O’clock Jump.

Elsewhere, soul titan Marvin Gaye provided the only entry from the seventies with his political masterpiece What’s Going On (1971). The title track from the iconic album of the same name received impressive scores for tempo, lyrics, and danceability leading to a final rating of 7.01.

The rest of our list is jam-packed with classic songs that will strike a chord with loved ones across the generations, from the festive croon of Bing Crosby’s Santa Clause is Comin’ to Town (1939) to the American Pop of The Jackson Five’s I Want You Back (1969).

The power of music to change lives is beyond question. From the mood-enhancing qualities of your favourite melody to the thought-provoking capabilities of the greatest lyrics, music has provided a deep source of comfort and escapism for people throughout the generations.

With our population living longer than ever before, we need to ensure that elderly people are given the greatest opportunity to enhance their quality of life. For those living with dementia, music can provide profound cognitive and emotional benefits that go far beyond the mere confines of ‘entertainment’.


Here's you can use music to help a loved one living with dementia:

Previous research has found that music can help reduce anxiety, maintain speech and express their emotions and enhance the overall wellbeing of someone living with dementia. Many care homes across the country provide music therapy - organised activities that involve music that both care home residents and carers enjoy.

The benefits of music can be seen both at home and in care settings. From listening to the radio with your loved one, enjoying their favourite songs together or even supporting your loved one to join a social choir or singing group - there’s lots of ways you can use music to support your loved one living with dementia.


While our definitive playlist covers all the decades in which people typically living with dementia would have been in their youth, we've also created a range of age-specific playlists for those who want to enjoy music released during a specific decade that sparks fond memories.

For music lovers who came of age in the ‘50s and ‘60s, we have a decade-spanning playlist designed to captivate those aged between 80-89. If you’re loved one is aged between 70 and 79, then we have this exceptional playlist filled with hits from the ‘60s and ‘70s. We’ve also designed a playlist for people aged 60-69 crammed with classic songs from the ‘70s and ‘80s.

To cover all age groups of people typically living with dementia , we have additional Spotify playlists for people aged 90-99 and 100-109.


According to aplaceformom.com, music can offer the following benefits to dementia patients:

Music therapy, as detailed by dementiauk.org, also helps with isolation as it can be a great group activity people can do together, allowing them to reminisce and share stories together.

Two sets of playlists were created, one which is “Upbeat” to encourage light exercise and heightened mood, and another featuring “calming” songs to lower blood pressure and have a calming effect.

A note on the songs used in this project, these playlists are merely an attempt to create a generalist playlist that could help a range of people. Songs that hold personal/significant value to an individual will be more effective. This post attempts to act only as a general guide.


2 . Through the use of Spotify’s developer API, we were able to extract the audio features of different songs. These features were scored and ranked in order to find songs that are more likely to help people suffering from dementia.


The following attributes were analysed, see below for the description of each as supplied by Spotify:


Each song had its features percent ranked in the following way for the “upbeat” playlists:


For the “calming” playlists, the only differences are danceability and energy are negatively ranked (lower value = higher score) to rank calming songs higher.


*In this article, we have referred to valence as ‘positivity’ and speechiness as ‘lyrics’ for readability.

Based on your selected criteria and the activity of similar individual’s using Lottie.
Over 60 and single? This city is your best shot at finding love!
What are the best UK cities for over-60s to fall in love? Lottie reveals where's your best shot at finding the one.
by Will Donnelly
100 years young: In which areas will you find the most UK centenarians?
Discover in which areas of the country you will find UK centenarians and how the data compares for UK men and women.
by Will Donnelly
The Best Short Walks in the UK for Wellbeing
We have analysed steepness, amenities and sunshine hours to determine which are the best short walks in the UK for seniors to boost their well-being.
by Will Donnelly