Data Insight > Best Walks in the UK for Elderly People

Best Walks in the UK for Elderly People

More walking brings many health benefits, and it’s one of the easiest and most effective forms of exercise out there for seniors, with many putting on their walking shoes and heading out to experience the joys of nature each month.

Lottie co-founder and one of the UK’s leading later living experts, Will Donnelly, says that ‘exercise protects physical health and boosts mental wellbeing, making it important to leading a happy life. And if being surrounded by nature may help to engage elderly relatives, you could plan trips with them to experience some of Britain’s iconic walks.’

We’re fast approaching National Walking Month, on May 1st, so Lottie.org analysed the UK’s best locations for outdoor walks for seniors. Looking at combining factors like amenities (benches and toilets), accessibility, air pollution and scenery, they gave 13 UK cities and 48 regions an average rating out 10 to determine which places had the best walks for the elderly. 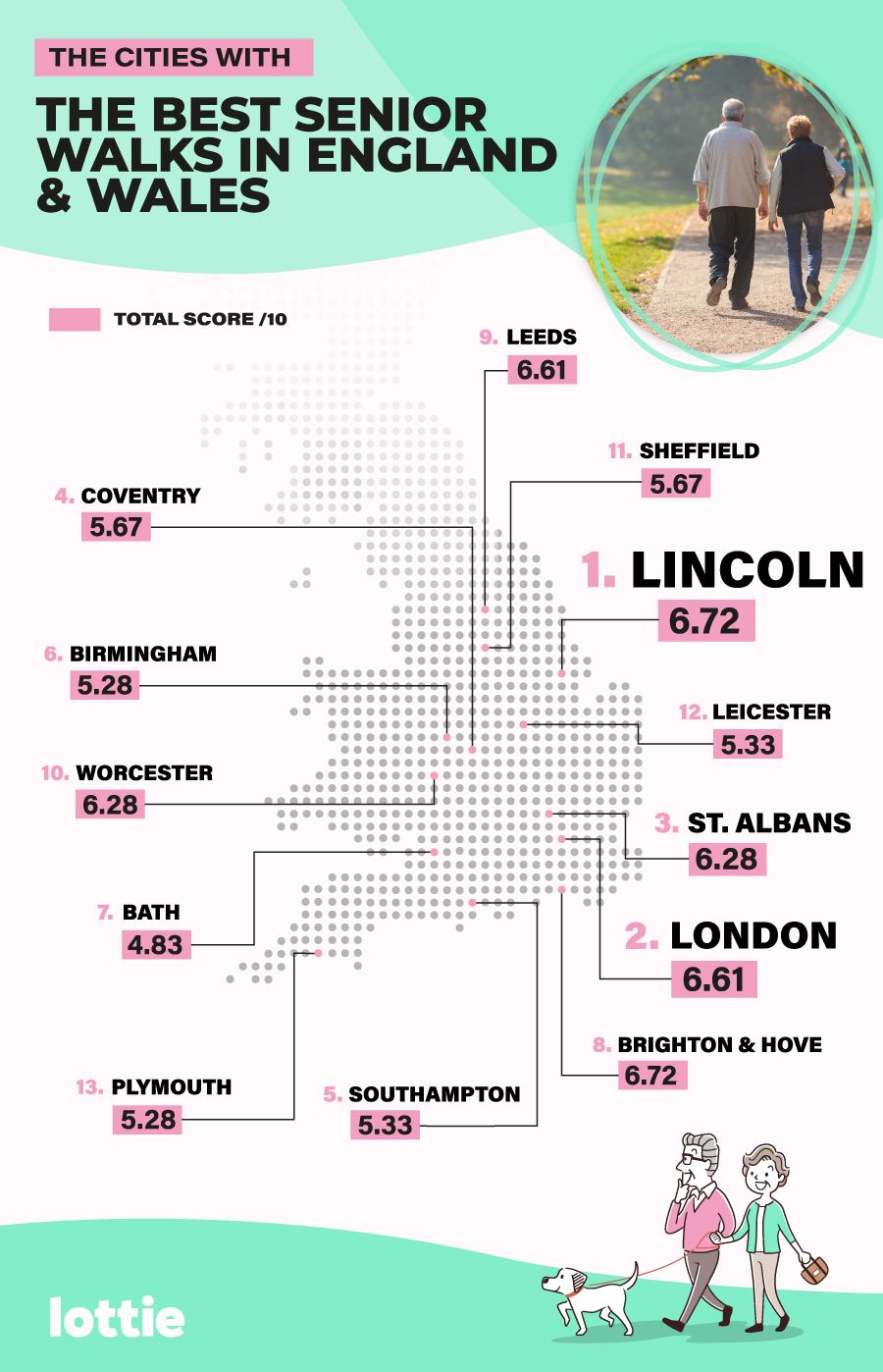 Top Cities With The Best Walks For The Elderly

As the number one city with the best walks for seniors, Lincoln scored 6.72 out of 10. The East-Midlands city was found to have the best rating for steepness in our study (10), suggesting its low-incline walks are ideal for a gentle stroll with your loved one. Undoubtedly its overall score was boosted by excellent proximity to a care home (8.33).

In second place, London had a score of 6.61 overall. The capital offers countless green spaces and rivers, which make for idyllic walking surroundings. And its scenic rural walks are the perfect way for the elderly to explore a different side of the city. London also boasts high scores in many categories including average care home proximity (9.17) and availability of amenities - benches (10), bins (10) and toilets (9.17).

Number three on our list takes us slightly north of the capital to St. Albans, which scored 6.28 out of 10. With the St Albans, Harpenden and Villages Health Walks Programme being part of a countrywide initiative of free, led walks, which promotes better health by encouraging everyone to get outdoors, it’s no surprise the city was among the top five overall. Great care home proximity (10), and high sunshine hours (7.50) also contributed to its high ranking.

Located in the heart of England, Coventry ranked fourth, with a score of 5.67. Surrounded by lush forests, rivers and lakes, the city offers many paths for walkers to bask in nature. It also rates highly when it comes to care home proximity (7.50) and route incline (8.33).

The next city takes us to the south coast - Southampton (home of the Spitfire), which scored 5.33. For seniors who wish to explore the historical parts of the city on foot, the Old Town has over 90 listed buildings, more than 30 ancient monuments and an array of medieval churches. Just making it to the top five, the city had a relatively low score (4.17) for proximity to a care home.

In sixth place was Birmingham which had a result of 5.28. The UK’s second largest city was the birthplace of the Industrial Revolution and its rich heritage can be seen in the many industrial-era landmarks scattered around the city and its complex network of canals. Away from the sprawling urban areas Birmingham has over 600 parks, where the elderly can enjoy a stroll. It also scored highly for proximity to a care home (6.67) and for the number of amenities - benches (8.33), bins (8.33) and toilets (10).

In seventh place, Bath had a score of 4.83. Many of the city’s iconic sights are within a short walk of each other, making Bath a great city to explore on foot. And with the countryside nearby, seniors can lace up their boots for a relaxing stroll through tranquil surroundings, meandering along the picturesque Kennet and Avon canal. Although the city scored very highly for the number of amenities (benches (9.17), bins (9.17) and toilets (6.67), it missed out on a higher overall score because of its lack of proximity to a care home. (1.67)

With the South Downs on its doorstep, Brighton and Hove offers some great trails in the South East of England. However, with an overall score of 4.72 out of 10, and ranking eighth, our results reveal the city’s walks are not as suitable for the elderly - while it had an extremely high result for hours of sunshine (9.17), its ranking was brought down by average scores for proximity to a care home (5) and amenities (6.11). Additionally, the coastal city’s steepness score of 1.67 suggests that its walks may be less elderly friendly.

With the same overall score of 4.17, two cities roughly 114 miles from each other by train received joint ninth rankings: Leeds and Worcester. For the proximity to a care home category, Leeds had an average score of 5.83 and Worcester had an even lower score of 2.50. Undoubtedly both cities’ overall results were brought down by low results for amenities.

Commenting on fun ways to get elderly relatives to exercise, Will Donnelly says that ‘one of the great advantages of living in the UK is its wealth of stunning landscapes. Exploring the British countryside is always enjoyable, meaning a long nature walk can be a fantastic way to make getting healthy more enjoyable!’ So, as well as results for cities, we’ve also shared the Top 5 UK regions with the best walks.

Scoring 7.28 out of 10, Suffolk took the top spot for the best region for the elderly to go walking. From the scenic wool towns of Lavenham and Long Melford, to the spectacular landscape of Suffolk’s coast and heaths, seniors can take in the breathtaking sites, popularised by landscape artist, John Constable. With a sunshine rank of 9.15, the East-Anglian country is the perfect place for a stroll during the summer months. The region also scored highly for the availability of amenities, from the number of benches (8.72) to toilets (8.10).

A region that boasts picturesque villages, peaceful woodland, as well as breathtaking countryside, Essex was second, with a similar score of 7.25. Walks here would make for great exercise for the elderly, while they enjoy the stunning coastal delights of Bradwell and wander through the quiet country lanes in Little Bromley.

In third place, with comparable results was Greater London (7.22). With the capital city’s winding streets, historic buildings and lush green spaces, there’s no better way to explore all that the city has to offer than by foot. As expected, the region also had a high score for amenities, with benches and bins scoring 10, and toilets, 9.80.

Next up was Kent, with a high score of 7.11. Seniors will feel restored after basking in the glory of the garden of England’s delightful rolling countryside, villages and seatowns. This beautiful corner of the UK is home to many trails everyone will love, and its high rating is also due to its excellent care home proximity (8.72) and sunshine hours (9.79).

Just making it into the top five was East Sussex, scoring 6.94 with 16 beautiful walks analysed. A superb place to explore any time of the year, the region is characterised by a diverse landscape and plenty of wildlife, where the elderly can enjoy gentle country strolls and scenic vistas. Once again, fantastic care home proximity (9.79) and sunshine hours (8.94) have contributed to its high ranking.

Based on your selected criteria and the activity of similar individual’s using Lottie.
Paw-fect Pets for Later Life: Which animals make the best companions for seniors?
In a survey by The National Poll on Healthy Aging, over 1,000 pet-owners aged 50 to 80 were asked about the difference their pets made to their lives.
Will Donnelly
The UK Cities With The Best Elderly Care
With a rapidly ageing population, the UK's need for quality elderly care is greater than ever. But which cities have the best elderly care?
Will Donnelly
Song analysis reveals how the lyrics of music have changed throughout the decades
Popular music has changed dramatically throughout the decades, with each era seeing different styles and genres rise in popularity as others fade away.
Will Donnelly