#CareCollective > When Are We Old - What Age is Elderly?

When Are We Old - What Age is Elderly?

Old, elderly, senior; there are a variety of words used to describe those who have passed middle age and entered the later stages of life.

Whether there is a set definition of old age is a difficult question, as many of the characteristics people associate with old age vary widely as to when they can emerge.

In this article, Lottie investigates what we mean by ‘old age’ and whether we can define what age is elderly.

Countries have varying attitudes to old age, with differences found in things like the age of retirement, state benefits and the way the population views old age.

The UK and the US

In the UK, the age you can claim your state pension (typically referred to as the retirement age) is currently 66, though with rising life expectancy, this is going to be increased to 68!

In the US, you can begin collecting Social Security payments at 62 (at a reduced rate), with the full rate given once you reach 67 for those born after 1960.

Similar expected retirement ages suggest it is around this age that a person is expected to enter a new phase of their life.

Plenty don’t retire at the minimum age, however, and retiring doesn’t necessarily make you old! Many are more than capable of continuing their careers with plenty of energy. In fact, between 1983 and 2018, the number of people employed at 65+ years old doubled!

In London, those who are 60 or over are eligible to get free travel on transport services with an Oyster photocard. Most attractions and venues offer discounted tickets for people around the age of 60-65. London Zoo classes seniors as 60+ years of age, Edinburgh Castle give concessions to those aged 65+ and you can buy cheaper tickets to Manchester United matches after you turn 65.

Surveys taken in the UK showed that the older you get, the later you define an age as becoming ‘old’.

This may show a reluctance to accept old age or a genuine belief that they still have plenty to offer and should still be considered middle-aged rather than old.

Factors in the Perception of Being Old

Each person is unique in the age they begin to consider themselves old, as everyone will have had different experiences throughout life, including their physical health and their appearance. 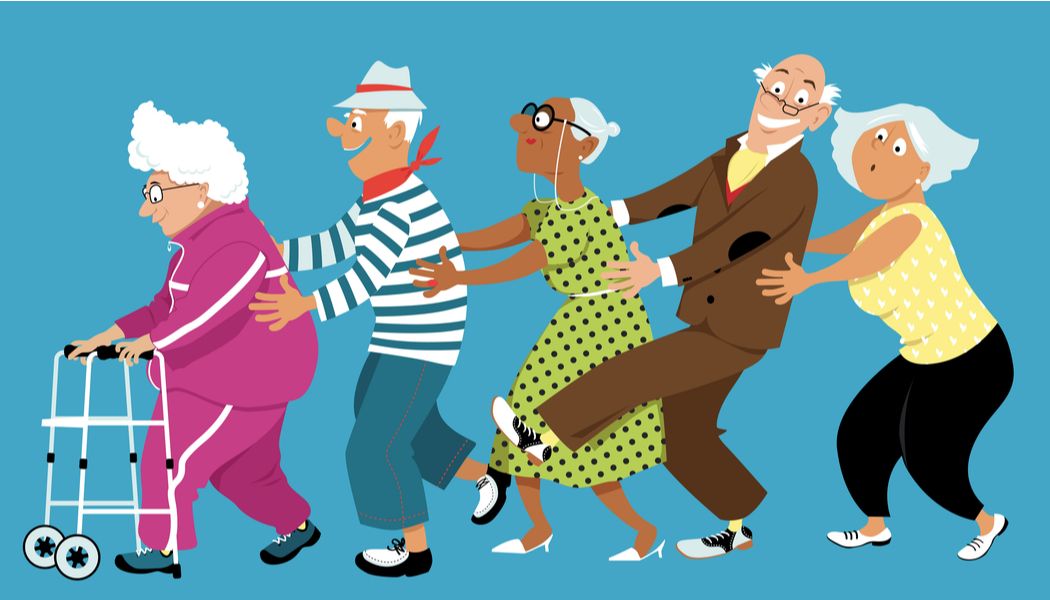 Variations in such factors mean that becoming ‘old’ is a grey area, one that can be reached earlier or later in your life depending on your particular circumstances.

Being called old often carries negative connotations and so it is natural when approaching your later years to distance yourself from the word.

For most people, there won’t be a sudden drop off as you pass a particular birthday. At age 70 you might feel the same as you did at the age of 65!

That being said, most people will agree that over 80 is old and that 40 is not old, so there must be a point in the middle where one becomes the other. Where you cross the threshold depends on a combination of your age and other factors.

An active role in society can be effective in delaying being old. Continuing to work, getting out and about and interacting with people all help to show that you still have the energy and drive of a younger person.

Walking to the shops and supporting local businesses, donating to local charities, using the parks and leisure facilities: all of these activities and more convey you are still an active part of society and will add youth to your personality.

A large part of being perceived as ‘old’ comes from physical health and your health status. Improving world health means in 2020 the average life expectancy for a male and female in the UK was 79 and 82 years, respectively, compared to 70 and 76 years in 1980.

How you walk, your mobility and the ability to exercise can all contribute both to when you finally feel ‘old’, and to how others perceive your age. Whether it’s retiring from your local five a side team or needing a zimmer frame to walk, there may be different points at which you begin to realise your life has changed.

Typical age-related changes in appearance might be grey hair, wrinkles, liver spots, diminishing height and receding gums. The more of these you have, the older you might appear to somebody else and to yourself.

Many changes happen gradually over a number of years and you might not yourself notice a specific time when you suddenly look in the mirror and think you look old.

There are many anti-ageing treatments people use to delay the process as much as possible, with creams, injections and treatments all battling to stave off the signs of getting older.

Living on your own, being able to do your own shopping and driving yourself around are all signs of independence which help to hide you from being labelled old.

Not needing help with everyday tasks shows you can still live just as you did 20 years ago, and for many, this would be considered evidence that you are still not ‘old’.

After all, if you’re doing all the same things at age 65 as you were at 50, you’ve hardly aged at all!

On the other hand, needing help from family members and requiring greater levels of health care and professional services suggest that your life has now indeed changed, and this loss of some independence could be explained by being ‘old’.

Not being able to drive, to go out alone or to do jobs around the house are things associated with old people that are now settling into a more relaxed and less energetic lifestyle.

There are different ways to describe people of a greater age, and each way has different connotations.

Being called an old person isn’t particularly nice, and your age and appearance play a large part in whether someone calls you old.

For example, once you are past a certain age or once you have a full head of grey hair, regardless of how you are living your life, some people might start referring to you as old. However, it is a subjective opinion; not everyone will agree on when you become old.

Road signs warning for elderly people in the UK have a picture of a hunched over couple, where the man is using a walking stick and the woman is leaning on her husband for support. It isn’t surprising that people would rather be associated with a different image and not considered an elderly person.

Given that geriatrics is a branch of medicine that focuses on diseases and problems in old people, so referring to someone as geriatric might might imply you think they require medical treatment due to their old age and have a poorer quality of life.

It is quite a clinical word, and probably best left just for medical professionals to describe their patients and medicine.

The word senior is often used for discounted tickets and purchases for those who are now older than 60 years old or maybe 65 years old.

A senior citizen suggests someone of older age but without the negative connotations of frailty and old age. Of 3,562 adults over the age of 50 surveyed in Scotland, 36% preferred to be referred to as senior citizens, compared to 21% as older adults and 20% as older people.

The simple answer is that there isn’t a defined age when you become ‘old’ or when you are considered elderly.

Young people will think you are old earlier, older people will think old age begins later on. People biologically age at different rates and so chronological age can’t be relied on, as a 70 year old might have better health, greater mobility and more energy than many 60 year olds.

How you perceive your own age will be different to how others perceive it and remember, age is a personal thing and you are only as old as you feel!